So once again I haven't been too diligent about updating this here Blog. I've been pretty busy on some stuff I may or may not be posting here down the road. Top secret stuff... you know.
Anyway, a few months back I answered an ad on Craig's list from these dudes looking for a comic book artist. After some back and forth, kinda started to feel like they weren't as serious about it as I was. I guess the moral of the story is if you want freelance work, maybe avoid Craig's list, stick to Guru. I do have some initial concept drawings I did for them though, that I figured I could put up. They just gave me a very brief description to see what I would come up with. 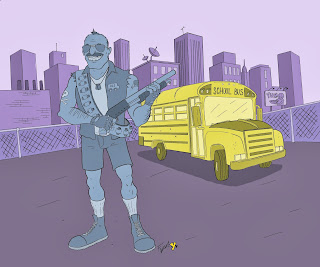 The description I was given Bus Driver wearing aviators with a shotgun. 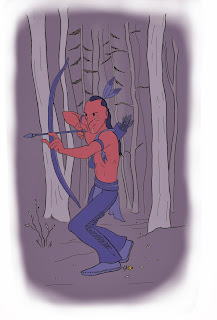 They wanted a Native Warrior type dude in the woods drawing his bow. 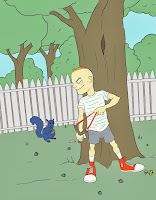 A kid with red hair and freckles with a sling shot.

Anyway, got lots to do. 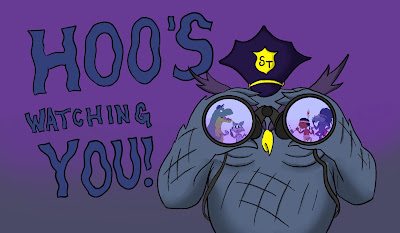 So I've been working on title cards for episode ideas I came up with for the Breakfast Serials. This one here is for the episode centered around Hoo the Secure-Tek Owl. Confident that good publicity from him solving an actual crime would make Secure-Tek want to take him back, Hoo decides to keep an eye on the gang, as he's sure they're up to no good. The gang is of course planning to heist a shipment of Sugar Scraps. Will Hoo foil their daring high speed heist and put the infamous Cereal Bandits behind bars once and for all? You'll have to watch to find out! Also the show has to get made and all that stuff first. 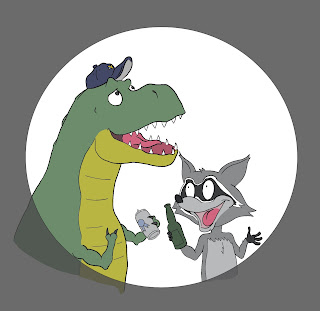 Figured I'd give you a better look at the Gang hanging out while Hoo stalks them from a distance. I figure they're having beers in the parking lot outside the support group as they do. 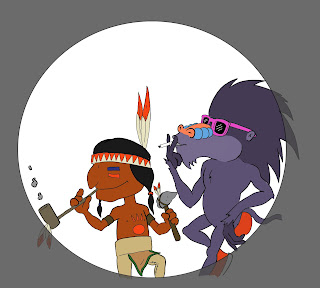 I've got a bunch more coming soon. Also there's a bunch of other stuff I've been busy with that hopefully I can post soon. Stay tuned!
Posted by fyshpower at 4:28 PM No comments: 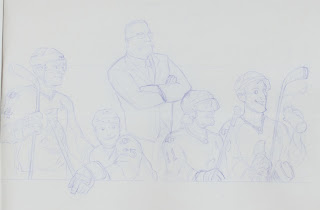 Woke up today to some terrible news. Daniel Alfredsson will be playing for a team other than my beloved Senators next year. It's just a mish mash of emotions right now. Sad and confused are kind of the front runners though.We don't really know why this happened. Certain theories make me worry about my Sens going forward. It leaves me so conflicted. I want Alfie to get a cup, but I had hoped it would be with the Senators.
I had drawn this up during the playoffs. I was planning on inking and coloring it at some point before next season. Don't really feel like it anymore...
Good luck Alfie.... You've been a class act for years. I hope you really thought this one out. You will be missed. 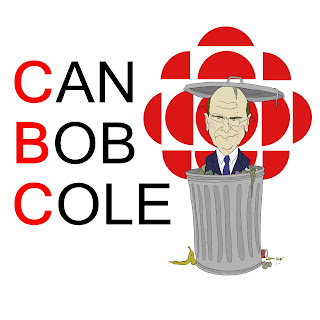 I guess as long as I'm on a hockey note I'll put this up too. During the first round of the playoffs I tuned in to the CBC to find that noted Senators hater, and senile old man, Bob Cole was doing the play by play for the Sens and Habs first round series. The guy seems to have no respect for any team that has entered the league in my lifetime. We endured it last year during the Rangers series, but the hope was since the Leafs had made the playoffs, he'd be assigned to their series. No such luck it seems. We had to listen to a play by play 3 steps behind if not lost all together, along with a spite for our side, seemingly due to being less of a storied franchise than our original 6 opponent.
I decided something must be done. I started a petition at Change.org to "Can Bob Cole". Drew that up to go with it. Now the thing only got about 400 signatures. A far amount less than i was hoping for. Come the second round though, Jim Hughson got the call! Now some might point out that, he had the leafs series the round before, so he was going to get the CBC's marquee match up anyway. I still don't see any reason not to take full credit.

Hopefully next post will be a happier one.... Got some more Breakfast Serials stuff. Thanks for all the positive feedback about that.
Posted by fyshpower at 10:52 AM 1 comment: 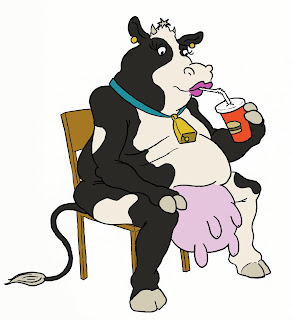 This is Gladys the Cow. Former Mascot For The Burger Barn fast food chain, Gladys developed an eating disorder, and became addicted to Burger Barn food. As a result of this Gladys gained a lot of weight, which is not a good image for a fast food chain that is currently trying to gain a healthier image after some bad press regarding the nutrition value of their food. Gladys was fired, and continued to eat away her sorrows. She is also stalking Casual Rex. 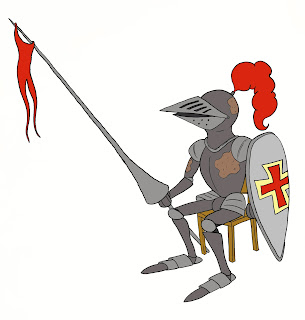 This is Armor plus Knight. Mascot for Armor plus rust repellent until he got too drunk one night and passed out in a ditch rusting up his suit of armor. 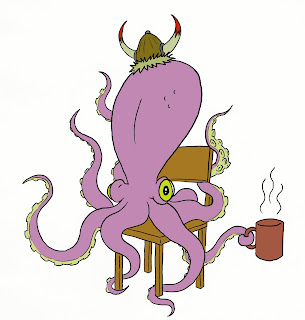 This is Kyle. An Octopus with a Viking helmet, the audience will never be told what he was the Mascot for. It will just be a running gag to cut into the group right after he's apparently finished speaking, and Darryl thanking him for his contribution in a manner that  implies something ridiculous was said that would only further confuse the audience as to what product he could have represented.

This is Danger Duck. Mascot for a series of Safety Videos for kids until he lost an eye in a freak accident. 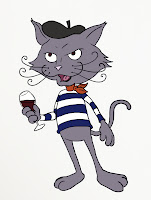 This is Gerard the Cat. Snooty Cat, former mascot for baguettes de Paris before they changed their name to something more patriotic.
Token Ninja....

Posted by fyshpower at 10:43 AM No comments: 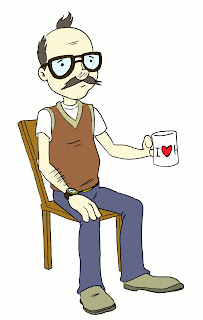 Concerned about his out of work friend, Tree frog Ron gets Scraps into a support group for out of work Mascots. It's a collection of Characters who for one reason or another are no longer employed, and are having trouble dealing with life after being a mascot.

This is Darryl. He is the wimpy former hippie social worker who runs the support group. He's a bit of a panty waste, and only barely has control over the group. His heart is in the right place though. He tries to protect Scraps from what he feels are negative influences. 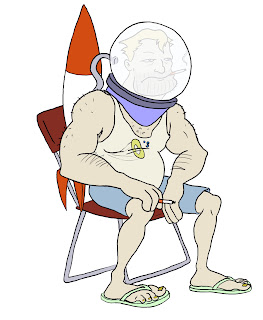 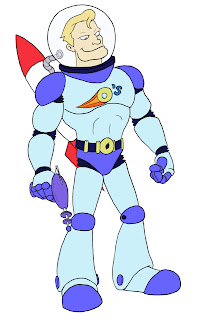 Once the mascot for Astr-O’s breakfast cereal, The Captain was fired in favor of what is essentially a more youthful version of himself in the Astro-O kid. The cereal execs felt kids would relate to the character more if he was akid like them. It was a huge blow to his psyche from which he hasn’t quite recovered. He had to sell of most of his space suit to pay his bills. The group hasn’t really been helping him, and he’s gone a little crazy. The Captain wants revenge on the Cereal company, and the Astro-O kid. Most of all though, he longs for his past glory. 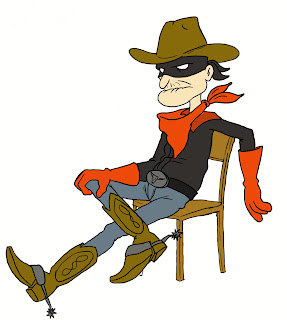 This is the Lone Stranger. Former Mascot for Old West Beef Jerky, The lone stranger used to light up the TV screen on his trusty steed. He had a very long run, and is comfortably retired from the mascot game. Being old and retired, he likes to frequent the group so that he has a place where people have to listen to him talk about the good old days. He's kind of an old bigot, having many views that aren't very PC with the current times. He's not well liked at the group. He actually only appears in the first episode, but plays a key role in Scraps transformation into the Cereal Bandit, as it is while attempting to rob Sugar Scraps from the Lone Stranger's grandchildren that Scraps acquires the mask and pistol that he uses as the Cereal Bandit. 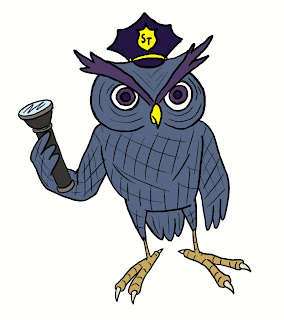 This is Hoo. Former Mascot for Secure-Tek. "Hoo's watching you!". Secure- Tek opted for a more high tech image and fired Hoo. Hoo's confident that if he can catch some criminals in the act, the press would make Secure-tek take him back for sure. He's keeping a close eye on Scarps and Rex and the gang, because he's pretty sure they're up to no good. This character also provide's us with an opportunity for some cheap Abbot and Costello "Hoo's on first?" gags.
. 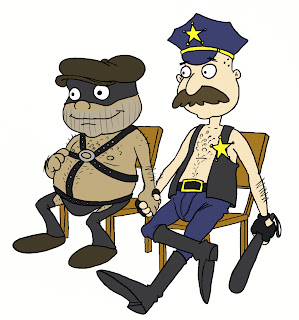 This is Constable Cookie and the Biscuit Burglar
Former Mascots for Crunchables Chocolate Chip Cookies, these two spent years chasing each other around, Cookie trying to keep the Biscuit Burglars hands out of the Cookie Jar. Eventually they could not keep a secret any longer, they were tired of chasing each other around, they were in love! and they wanted the world to know it. Unfortunately this probably wouldn't sell cookies and Crunchables promptly let them go. They have no regrets, although they do have a discrimination law suit pending. They now go to the group in a decidedly more "tom of finland" cops and robbers ensemble. Friends of Tree frog Ron, they were the ones who were able to get Scraps into the group. Constable Cookie also knows Detective Fontaine from his days back on the force.
Posted by fyshpower at 6:27 AM No comments: 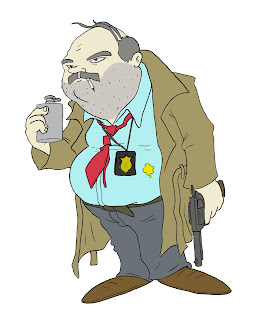 Now Scraps and the gang are out committing all these robberies, you have to think that the proper authorities have taken notice. Meet Detective Fontaine.Crusty veteran cop, every cop cliché you can imagine applies. Divorced 3 times, alcohol problem, he's this close to being busted down to traffic duty. His partner Davis retires in the first episode, and every episode after that he has a different partner who will either be asking for a transfer by the end of the episode, or get shot, etc. Each of these new partners will be representative of some cliché partner you'd see on a cop show or buddy cop film. They get more and more ridiculous as the season progresses. The reason he's not well liked is his wild theories about cereal robbery, that cartooned mascots are behind the recent string of robberies. Over the course of the season his role will increase every episode as he gets closer to cracking the case and maybe catching the infamous Sugar bandit.

Here are his partners by episode:
1.     Detective Davis - Fontaine's longtime partner who is retiring. Older black cop with a heart of Gold to put up with Fontaine all those years.
2.     Detective Mills - Young go getter cop, very by the book
3.     Detective Sabler - Sexy lady cop with something to prove 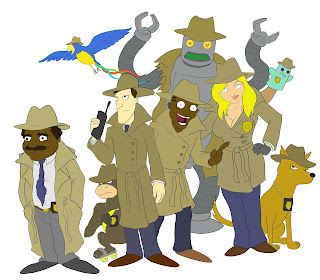 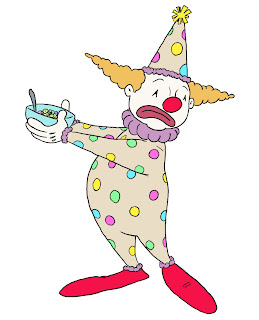 This is SpokesClown for Clowny Puffs breakfast cereal, a cereal with Marshmallow's in it. Puffy is one of those mascots who just wants to enjoy the cereal he represents. However, before he can ever eat it, it inevitably gets stolen by kids, making Puffy Sad. Over time this has began to wear on Puffy driving him insane. He hangs out at an old abandoned amusement park, and plots ways to get revenge on the kids who steal his cereal. 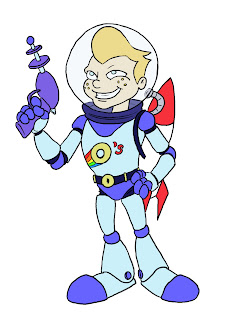 The Astro-O kid. SpokesKid for Astro-O's breakfast cereal. He is a boy adventurer who goes around the galaxy seeking out Astro-O's and fighting Aliens. He replaced Captain Astro-O (whom I will introduce later) after the Cereal execs decided that a kid would be more relatable to their target demographic. 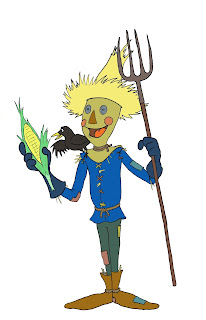 Petey the Scarecrow. SpokesScarecrow for corn yums breakfast Cereal, Petey doesn't say much. His cereal is something your dad would eat. 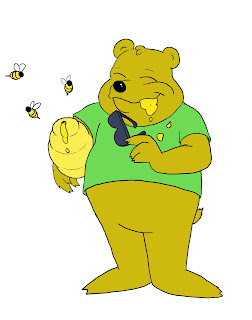 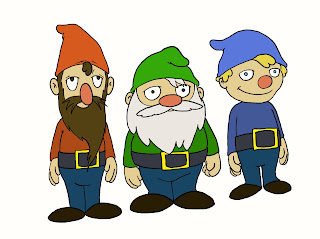 Spokes Gnomes for Granola Mills Cereal. They're kind of a cross between the Keebler elves and snap crackle and pop. 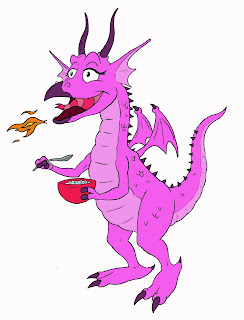 Sparkles the Dragon. SpokesDragon for Sparkles breakfast Cereal. Is the only girl mascot.

Posted by fyshpower at 2:32 PM No comments:

Posts from the Past